An investiture ceremony to formally install the members of the students’ council was held on 12th April,2019. This auspicious day began with an invocation dance and a prayer song. This was followed by a ceremony where badges were given to the office bearers who also took solemn oaths.

Our Director, Mrs. Priyankee Gupta, in her address to the leaders quoted, “If your actions inspire others to dream more, learn more, do more and become more, then you are a leader” ,to which the newly elected Head Boy of the school, Master Arbar Fahim Khan , in his Vote of Thanks assured all the same.

Our Principal addressed the gathering at the end of the programme, wherein he said that a student leadership programme is an exercise to build character and that it is important to value this above peer acceptance and popularity.

Over the weeks of hard work by our girls, we presented a cultural event on Rabindra Jayanti. The programme began in the late afternoon with the glorious opening dance based on Tagore’s song, “Jaya Tabo Bichitra”, followed by the lighting of the lamp along with Principal Sir’s speech.

The programme flowed its own way with the recitation of Tagore’s famous poem, “Hey Nutun”. Our girls were clad in colourful outfits. They performed dances and songs based on “Ritu Rango” (a play of seasons).

We depicted the gradual change of seasons from the hot scorching summer followed by the coming of monsoon, which next changed to autumn that mellowed to late autumn and turned into winter before giving rise to spring. 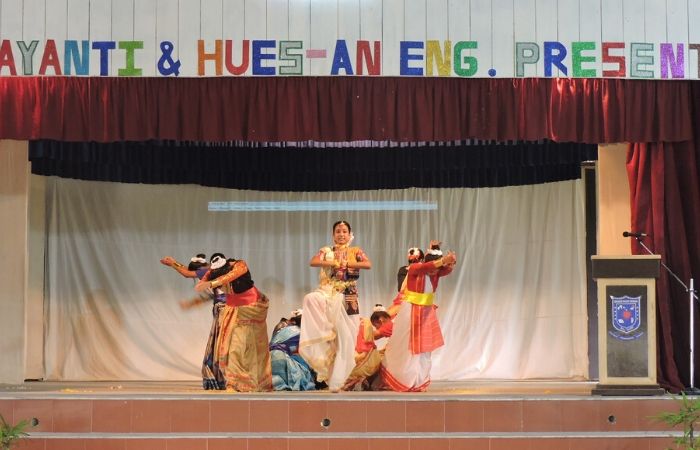 “Into that heaven of freedom my Father, let my country awake,” prayed the great poet. Heartians aspire to build such an idealistic nation in the future, and it is with such an idea in mind that pendence day.

The tri coloured flag got unfurled and the National Anthem was sung with great patriotic fervor to mark the beginning of the celebrations. This year’s special attraction was a show put up by the mini Heartians of the Primary Wing in which they dressed up as the famous freedom fighters. A short skit depicting the need of national unity was also staged, and a graceful dance performance by our girls stole everybody’s heart. It was a day of great oratory skills. Speeches were made not just by the authorities of the school, but also by the senior students.

The celebrations ended with our realization of the contributions of our great freedom fighters. We prayed for a united and prosperous nation.We aspire to be proud Indians who can be the epitome of honesty and integrity.

Bhanu Bhakta Aacharya, the Aadikavi of Nepali literature, is best known for translating the great epic Ramayana to Nepali language.

Our school celebrated the 206th birth anniversary of Bhanu Bhakta on 13th July 2019.The programme began with the lighting of the lamp. The opening song was in praise of Bhanu Bhakta for his great literary work. The students then delivered speeches in Nepali and English.Shloka of the Ramayana was also enacted.

The teachers of the Napali department Mr. Rajendra Dhakal, Mrs. Deepa Khadka and Mr. Anand Acharya put in their immense hard work in order to make this event a grand success. 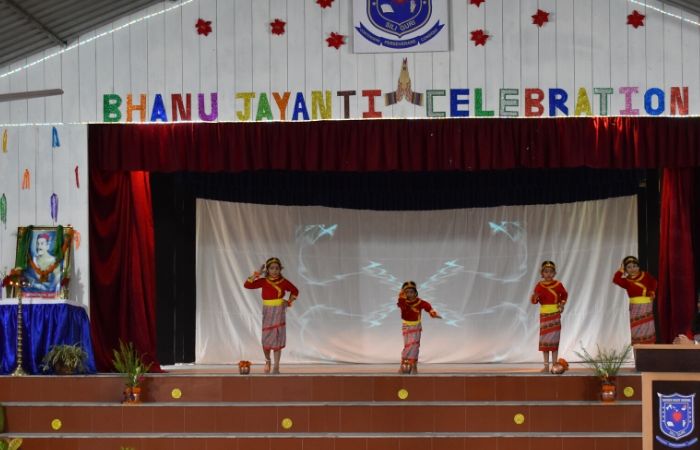 The bond between siblings is wonderfully celebrated as Raksha Bandhan.

What could be more delightful than having to celebrate such an auspicious occasion on the day of Indian independence!

Heartians tied a rakhee as a symbol of the purest form of love on the wrist of their brothers.

Teachers should be the best minds in the country, thought Dr. Sarvapalli Radhakrishnan, the great philosopher. It is to celebrate the birth anniversary of this eminent scholar and teacher, who was once the President of India, we observe Teachers’ Day in educational institutions all over India.

Teachers in our Indian society have always enjoyed a position that has been very high, second only to parents. It goes without saying one of the most awaited events in a school is Teachers’ Day. Come 5th September, and children are enthusiastic about expressing their gratitude towards their teachers.

Secrecy of the highest order is maintained by the students when they prepare for the celebrations of Teachers’ Day. No matter what happens, it is ensured that no one spills the beans and the entire presentation comes as a pleasant surprise to the dear teachers.

5th September 2019 was no exception. Under the guidance of the Principal, the Student Council took charge and executed a wonderful programme to show their gratitude to their teachers. The teachers were felicitated with khadas, roses and cards. This was followed by an entertaining cultural show. Special credit goes to the catering department of the school, without whose efforts no celebrations would have been perfect. Above all, the celebration cemented the bond between the educators and the learners and shall remain as one of the most memorable events of the year. 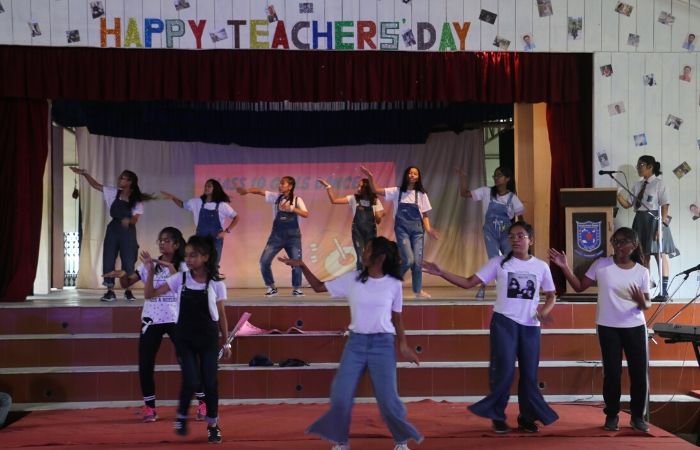 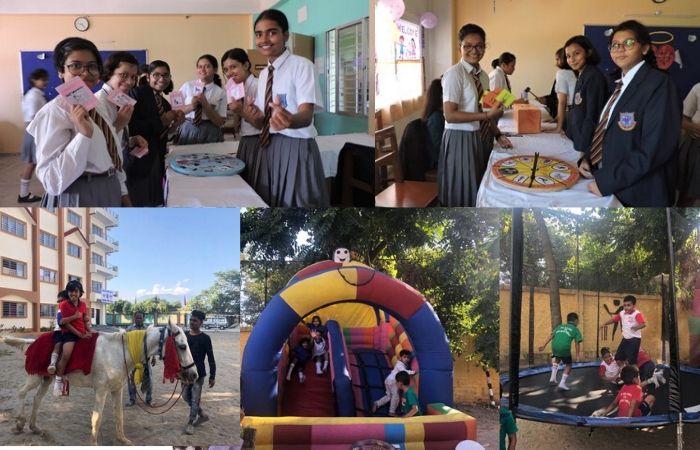 A school exists for children. Hence it goes without saying that Children’s Day is observed in a gleeful spirit each year. The day began on a different note with teachers performing in the assembly. Melodious songs and heart touching speeches made the event memorable.

The excitement began after the Fete was declared opened. It was wonderful to see the children shouldering the responsibilities of the stalls and enjoying themselves at the same time. The fun filled day passed on with children taking to horse riding and rocking to the rhythm of the Disco. The Photography Stall featured as a special attraction. The Food Stall , no doubt proved to be the most frequently visited one, as it offered a wide range of delicacies prepared with special care. It was such a pleasure to see innocent faces light up with joy on winning different prizes at the Game Stalls.

Watching children enjoy their day can take one back to one’s childhood and make one relive those golden days. We look forward to the next 14th November, waiting for a moment to be at a leisurely stress free state. 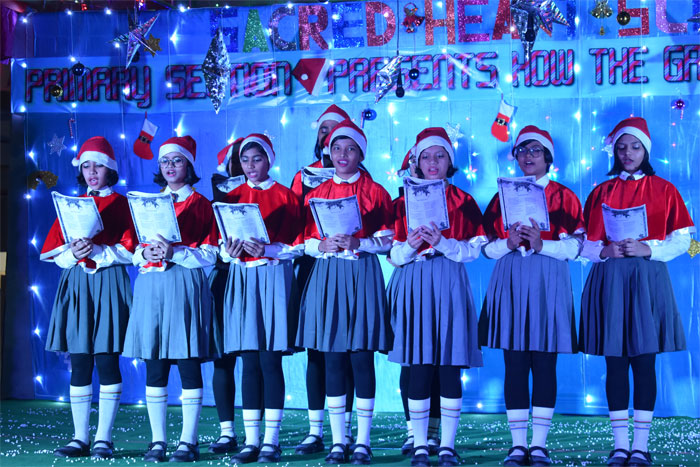 Christmas is celebrated with great enthusiasm before the children go home for their winter vacations. This year was no exception. The Primary Wing had organized the Christmas celebration programme on 15th December 2019.

It was an honour to have Father John Tigga present amongst us. The event commenced with the blessing of the crib by Father. Melodious carols were sung by the Heartians which no doubt created a nostalgic impact on everyone present.

Inclusiveness has always been a part of the culture of Sacred Heart School. Hence the Christmas play had the participation of all the students of the Primary Wing. “The Grinch stole the Christmas” as a play is both educative and entertaining. The story revolved around the character of Grinch who evolved into a charitable person from selfish one. We saw how influential a child could be in the molding of a character.

Sacred Heart has never failed to recognize the inborn goodness of a child. Various members of the Sacred Heart family, dressed as Santas gave away gifts to children of the Flame of Hope and to little Heartians. Delicious dinner awaited us as the celebrations ended with the bursting of crackers.

On 29th January, 2020, we celebrated Saraswati Puja. On this day, we wear traditional clothes and are supposed to fast till the end of the puja.We break our fast with the’ Prasad’.

Class XI boys and girls organized the Puja under the guidance of Mrs. Das, Mrs. Roka and Mrs.Gomes. Our day began by settling the pandal and cutting of various fruits like pomegranate, guava, apple, banana for the Prasad. The puja began at the strike of 11 am and continued till 12:30 pm. Thereafter we, sought Swarswati’s blessings. Students came to offer their prayers and to receive the divine blessing. 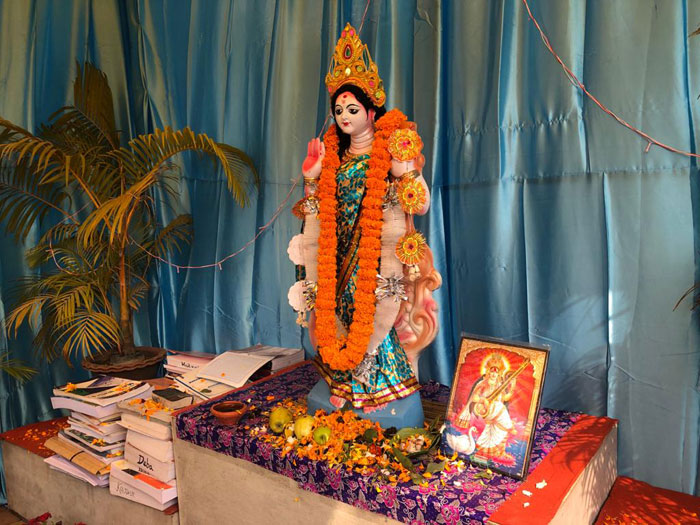 It commenced not with a low key since the event witnessed high profile dignitaries ushering the graduating batch of 2019-2020 in a grandeur procession which marked the adorned initiation of the event that evening.

It was on 25th January,2020 when Sacred Heart School celebrated its Graduation Day with an accompaniment of esteemed guests, Dr. Gangotri Chakraborty, Head of the Department of Law, North Bengal University, Mr. Martin Sinha, an educationist who is directing Isabella School, Siliguri and Mr. Rupendra Mukhia, Principal of The Scholars, Islampur.

Conventional procedure of invocation with lighting the lamp accompanied by a hymn followed the procession. The school choir, then rose with customary performance of an appealing and amazing number, “Wind of Change” by Scorpions.

Thereafter, a ceremony that upholds the proceeding of an absolute highlight took place. It was then when the student council handed over the school flag to the new era of leadership to begin in the school.

A moment to wave off has always been hard to stomach, especially when things are close to our heart, however the fact that ‘never to mean it’ let us roll on. 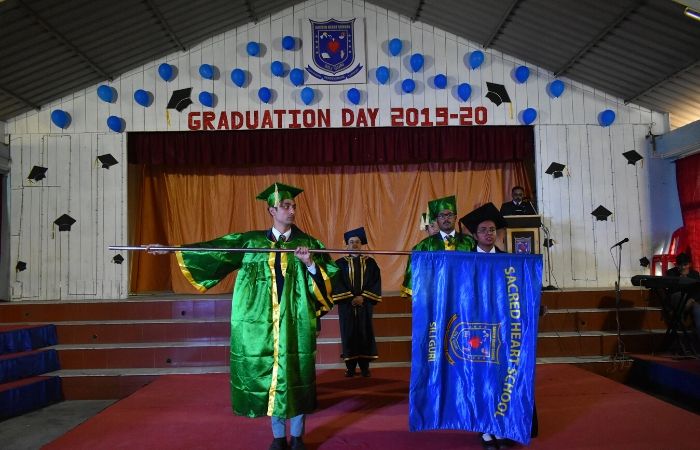 The solemn gratitude expressed to the Heartian friends and family by Arbar and Jhanvi , the Head Boy and the Head Girl, and the reminiscence recalled in the graduation speeches brought tears to the eyes of many. The ceremony of seeing off was further flavored with good wishes for the future endeavors from Mr. Das, Senior Coordinator. The closure of the event was glorified with the declaration made by Mrs. Priyakee Gupta, Co-director of Sacred Heart School and it marked its end with the school anthem. 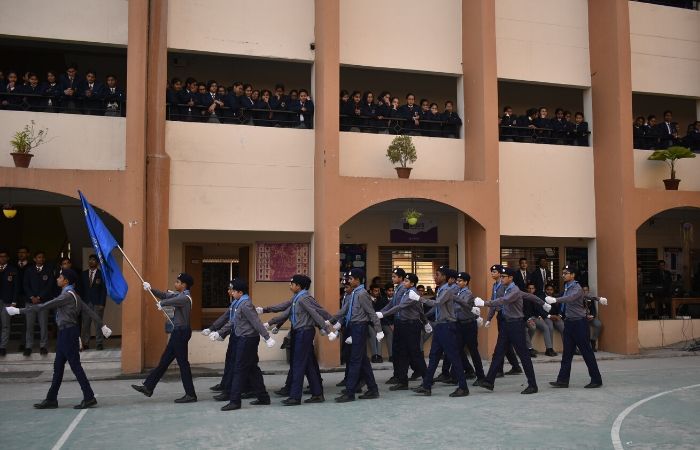 Our school celebrated India’s 71st Republic Day with great éclat. The students took pride in glorifying and celebrating the spirit of unity. Carrying on the tradition, like every year, our Scouts under the guidance of Mr. Bobin Rai, commenced the celebration with parade followed by the unfurling of our national flag by the Director and Principal.

Music always plays an integral role in any occasion, likewise, the tricolors representing truth, courage and purity blended with the melody of songs sung by our students from both the Primary and the senior section.

One of our students reverberated the passion and love of the motherland through his inspiring speech. This was followed by the scout gliding their way through patriotic fervor and enthusiasm on roller blades to hoist the flag.

The celebration came to an end with the Principal addressing the gathering which was followed by the singing of the National Anthem. The students dispersed with the image of the fluttering tricolors in their mind and heart. May we continue celebrating this day forever.

Hard work, diligence and sincerity never go unrewarded. On 19th February 2020, Sacred Heart School acknowledged the academic brilliance of those students who secured for themselves a prominent position among the first three highest achievers in each class. Prizes were also given away for application and proficiency, helpfulness and neatness. Keeping in mind the multifarious interests of the present generation awards were also given for social service and for contributions to sports and to the cultural field.

The presence of an eminent scholar, Mr. Dhiraj Saha, H.O.D. Zoology, NBU as the Chief Guest was very encouraging. The Guest of Honour, Mrs. Sangeeta Reddy, Mrs Sapna Pradhan (who graced the Award Ceremony of the Junior School as Chief Guest), Mr. R.K Jain and other esteemed dignitaries also witnessed the ceremony. The students were motivated to work harder by Mr. Dhiraj Saha who delivered and educative speech. Mrs. Reddy’s interesting words were greatly appreciated. 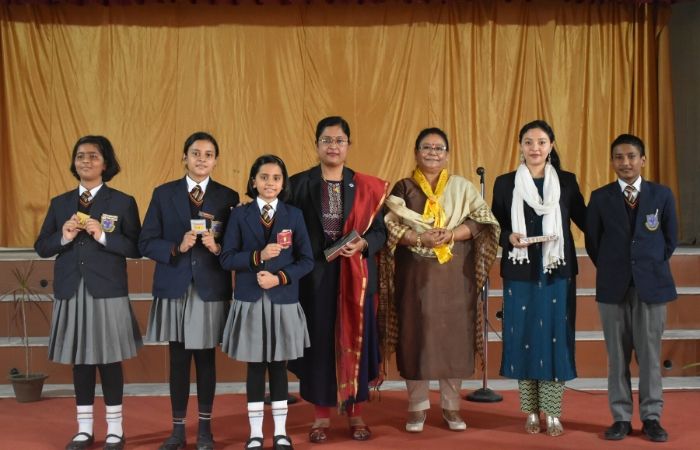